What are knee deformities?

In a normal knee that is correctly aligned the body weight passes down the middle of the leg – through the hip, knee and ankle. Approximately 60% of the forces pass through the medial (inside) part of the knee, and 40% through the lateral (outside) compartment. When the knee is not perfectly aligned, it is known as either varus (bow legged) or valgus alignment (knock-kneed).  In patients with a  varus knee, more load is distributed to the medial (inside) part of the knee, putting stress on the articular cartilage on the inside of the tibial plateau, which becomes damaged or worn away.  This makes the angle even more pronounced which as a result causes further damage. In valgus deformity, the lateral (outside) plateau is overloaded.

If you are either bow-legged or knock-kneed, you are at higher risk of osteoarthritis as the protective layer of articular cartilage is worn away, exposing the underlying bone.  Malignment not only stresses articular cartilage but it also affects menisci, synovial membrane, subchondral bone, and ligaments – all of which may play a role in the progression of knee osteoarthritis, meaning you may develop knee pain and function problems later in life.

Most people have a small degree of bowleg or knock-knee which enters within the limits of normal structure and function. During normal development in the first few years of life, because of rapid and differential growth around the knees, most children are bowlegged for the first 3 years of life, then become knock-kneed until 5-6 years old, then straighten up by the age of 7.

A slight valgism is normal although it is often more pronounced in women as their hips are comparatively wider, and they are more prone to valgus malalignment.

Cases of varus/valgus knee that require treatment can be caused by any of the following:

Being overweight considerably exacerbates the symptoms as it increases the forces being placed on the articular cartilage.

How do they feel?

Pain during weight bearing, sometimes there may be swelling, and limping in cases where the malalignment is more pronounced.

Your doctor will examine your knee and ask you about your case history.  He will also ask for a full-length standing X-ray (from the hips downwards) from which he can calculate how far your knee is out of alignment.

Your doctor may prescribe any, or all, of the following treatments:

1. Change of lifestyle – for example losing weight, and regulating your level of activity

3. Injection therapies such as hyaluronic acid

4. Physiotherapy – exercises to regain the range of movement of your leg, your balance, and to rebuild the muscles.

A knee osteotomy (bone cut) of the top end of the tibia (bowlegs) or the bottom end of the femur (knock knees) will be performed.  The aim is to realign the mechanical axis of the limb shifting the weight bearing line from the diseased side of the joint to the (more) normal compartment.

The surgeon will make an 8cm incision, through which he will cut and pull back the soft tissues.  He will then cut the bone, and realign the tibia/ femur, opening the cut, until the bone is straight. The bones are then held in place with a small metal plate that is screwed into the bone. The alignment will then be checked on an Xray before closing the incision.

During the non-weight bearing period you will be given physiotherapy exercises to regain the range of movement of your leg, and to strengthen your quadriceps (thigh) muscles.  You will be asked periodically to undergo X-rays to check the alignment and the healing of the bone. 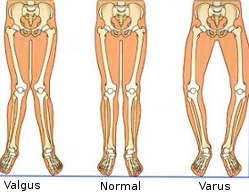